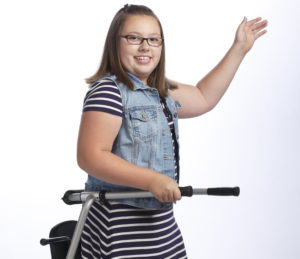 Jerzee was born nine weeks premature, weighing only four-and-a-half pounds.  When she was only three weeks old and still in the neonatal unit, Jerzee was diagnosed with cerebral palsy. Her parent’s Jacquie and Jeff were rocked by the uncertainty facing their little girl, but Jerzee’s undefeatable spirit quickly emerged.

The family was introduced to the Children’s Rehabilitation Foundation early on as a resource for the equipment their lively little girl needed.

The Foundation paved the way for Jerzee to become physically active by purchasing her first walker, her first bike and a specially equipped sledge for playing sledge hockey. Jerzee now dreams of competing in the Paralympics one day and with her determination, nothing can stop her.

This entry was posted in Children's Stories. Bookmark the permalink. Both comments and trackbacks are currently closed.
Loading Comments...